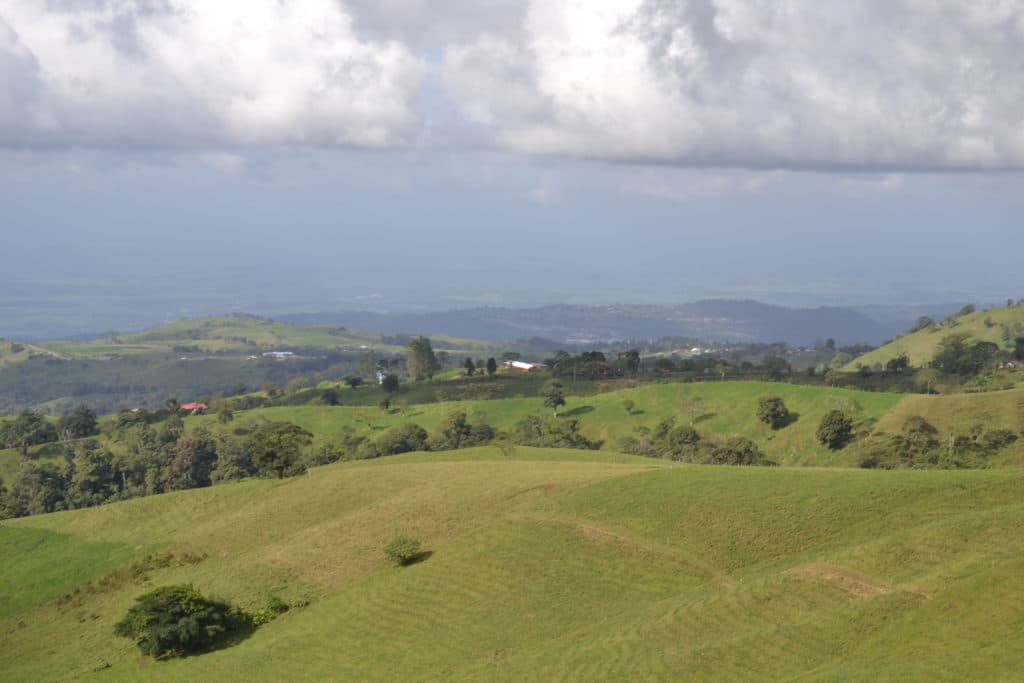 Today, on the first day of 2017, we are making our way to Guanacaste Province in Costa Rica to visit the leatherback turtle nesting beaches. As we pulled out of La Fortuna we headed away from the wet tropical rainforests of Central Costa Rica, traveling northwest across the continental divide and then down into the lowlands of Guanacaste; an area known for its dry rainforests and white sandy beaches. 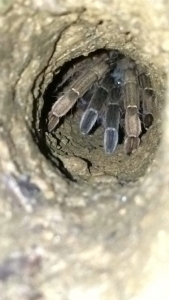 On our way to the leatherback turtle nesting beaches, our first stop was to take a tour of Costa Rica’s famous Arenal Hanging Bridges in the mature wet forests of Mistico Park. According to Wikipedia, this area receives up to 250 inches of rain each year. The 243-hectare wildlife reserve features a series of suspension bridges along easy to navigate paths through the tropical rainforest.

Here, it’s possible to see many species of Costa Rica’s trees, mammals, reptiles, and birds in their natural habitat. There were three paths to choose from with varying levels of difficulty, depending on your comfort level.

Seeing the rainforest from above gives you a whole different perspective of the diversity of this rainforest. Closed shoes like runners are mandatory for your own protection. 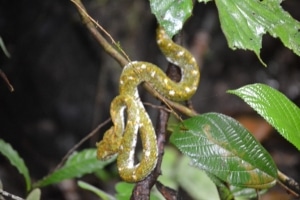 On our hanging bridges tour, we saw a yellow venomous viper snake, several tarantulas, a number of birds, and even Costa Rica’s wild boar, which we could easily smell before our guide pointed him out beside the creek below. On clear days you can even get a view of Arenal Volcano from here but the weather was still overcast today and it started to rain, which meant that the local sloths and monkey species were all hiding and keeping still, trying to keep out of the rain. This made it very difficult for us to see them today. Although our guide said he could smell the monkeys and knew they were near, they were well camouflaged. 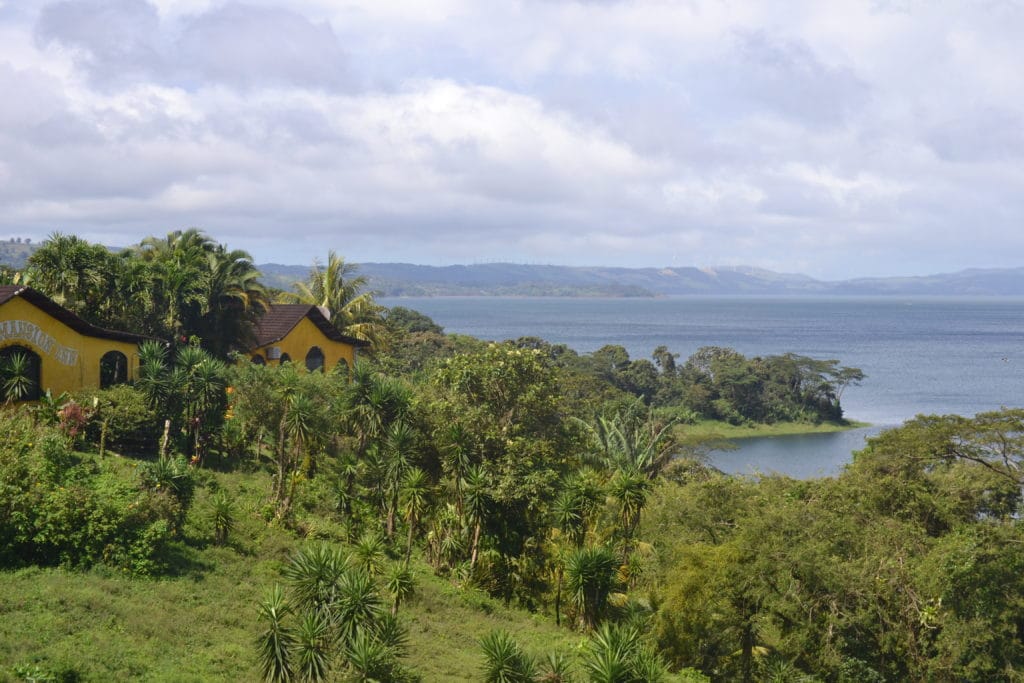 After leaving the Hanging Bridges area our tour bus took us around Lake Arenal towards the leatherback turtle nesting beaches of Guanacaste. Lake Arenal is not only a man-made lake but also the largest landlocked lake in Costa Rica, covering 33 square miles. It was created to support the new hydroelectric dam, which now supplies up to 12% of Costa Rica’s electricity. Lake Arenal is also an important year-round recreational area for Costa Ricans that like to windsurf, fish, kayak, go boating, or do land activities like hiking, mountain biking, or horseback riding.

Once around Arenal Lake, we headed down into the lowlands of Guanacaste Province. Our tour guide Paul, provided us with a wealth of knowledge about Costa Rica on this trip, including the history of the province of Guanacaste (which used to be an independent state) and how Guanacaste eventually became a part of Costa Rica and how the government has worked hard to protect the leatherback turtle nesting beaches.

Costa Rica is widely considered to be the birthplace of ecotourism. In this area, located on the northwest coast of Costa Rica, Guanacaste is world famous for its beautiful Pacific Coast sandy beaches. We headed over to Playa Grande, an area that so far has been able to ward off what could have been very lucrative commercial development, in favor of preserving these natural leatherback turtle nesting beaches. In fact, as many as five different species of turtles nest here, including the green sea turtle, the Olive Ridley sea turtles, and of course, the most impressive (and most endangered) species, leatherback turtles. 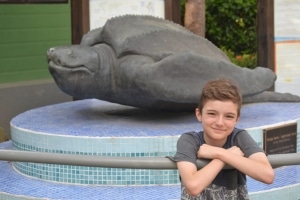 I was really quite impressed at how Caravan Tours is taking an active role in supporting the preservation of these leatherback turtle nesting beaches. Caravan has taken the initiative to create an educational center, even producing a short video on the efforts that Costa Ricans have taken to preserve these turtle nesting beaches and help ensure the survival of the Leatherback Turtle.

In the video, one of the oldest long-time volunteers remembered seeing as many as 200 leatherbacks come ashore in one night to lay their eggs. But last year, he only saw 37 return here. In fact, the population has declined up to 90% in the last two decades. Leatherbacks have been around for over 150 million years and can grow up to 8 feet long and weigh up to 2000 pounds, so the exceptional work the volunteers are doing here is essential to their survival. The volunteers actually gather the turtle eggs and care for them in nurseries until they hatch. On their own, only 1 in 1000 Leatherbacks survive to adulthood but the work that is being done here has helped raise the survival rate to three times as many.

We must also give kudos to Caravan for pitching in and doing their part to raise awareness and support this amazing turtle preservation program. It was also really cool to see our naturalist guide, Paul, as one of the featured commentators in the video.

After leaving the leatherback turtle nesting beaches, our last stop was at the amazing JW Marriott Resort, which opened only 5 years ago. We are here for two nights and tomorrow we have the day to ourselves to relax and enjoy this 5-star resort. Really looking forward to it.