Have you heard of Monkey Island Panama?

One of the comments made by travelers on Caravan Panama vacations is the surprise at how quickly Panama City’s downtown core and metropolitan area turns into lush rainforest.

More and more travelers from around the world come to vacation in Panama City. They vacation here to take in the many surrounding tourist attractions such as the Panama Canal, the Amador Causeway, or the Bridge of Americas. However, in most cases, it is the natural beauty of the country that is impressed upon their minds as they leave.

When the Gatun Dam was built in the early 1900’s it stopped the Chagres River from flowing into the Caribbean Sea. The dam created Gatun Lake, which at the time was the world’s largest man-made lake. Gatun Lake is still one of the 5 must-see man made wonders in Panama. 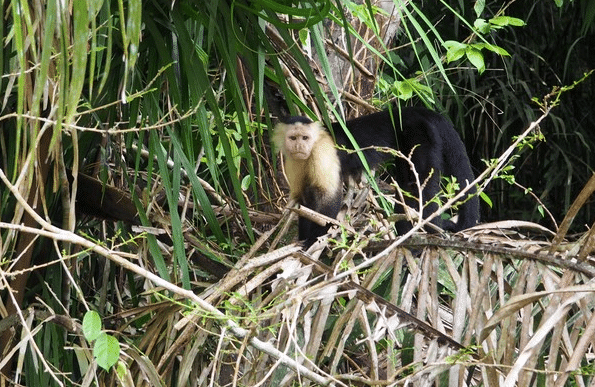 Today Gatun Lake is an invaluable asset to the Panama Canal as each year it carries tens of thousands of vessels through 33 kilometers of their journey across the Isthmus of Panama.

Clues as to what the Chagres Valley might have looked like over a century ago, before the lake was created, are visible on a Panama boat cruise across Gutan Lake. Century old trees can be spotted floating to the surface of the water. For this reason there is a clearly marked channel to keep ships on track and out of trouble as they cross Gatun Lake. Small vessels, in particular, are susceptible to getting caught up in the debris.

Other clues include the small islands that were once the peaks of the surrounding Chagres Valley hill tops. The peaks from the valley jut out of the lake’s water surface and form rainforest “hilltop islands.”

The most famous hilltop island in Gatun Lake is Monkey Island Panama – known for its large population of monkeys. Some may say the island is infested but most tourists are delighted at the chance to see a variety of monkeys while on their boat tour.

Most Gatun Lake tours make a stop at Monkey Island and allow passengers to get an up-close encounter with the island’s monkey population. The monkeys are known to be somewhat curious of tourists coming so close to their island and often adventurously crawl into the boats to interact.

Monkey Island is home to four species of monkeys:

Gray-Bellied Night Monkey – Also known as the Lemurine Owl Monkey, this species is native to Panama. Vacationers often miss seeing this monkey because it sleeps during the day and hunts for food at night. You may expect the monkey to have a gray belly but in fact it has a gray coat on its back that turns into a reddish-brown coat on its underside. Unfortunately, the gray-bellied night monkey is vulnerable to becoming extinct in the future.

White-Faced Capuchin Monkey – Also known as the white-throated capuchin or white-headed capuchin because of its primarily ‘white’ upper body. These monkeys are very social and live in groups of about 20 throughout Central and South America. The lifespan of the Capuchin Monkey in Gatun averages about 50 years.

Tamarin Monkey – Found only in Panama and Colombia, this is the smallest monkey in all of Central America. The Tamarin monkey especially enjoys the moist tropical rainforests located along the Panama Canal. If you take Gutan Lake tour between April and June you may see a Mother with her young, as this is their birthing season.

Other Wildlife Near Monkey Island Panama

The rainforest covered hilltop islands of Gutan Lake are also home to a diverse variety of other wildlife besides monkeys. Green iguanas, three-toed sloths, crocodiles, osprey and Keel-Billed toucans can also be spotted by visiting spectators on Gatun Lake Tours.

A boat tour guide familiar with the islands and the island inhabitants are a great resource to learn about Panama’s ecosystem and its diversity. As most Gatun Lake Cruises use small 10 to 20 passenger vessels, the tour is often quite interactive and there is rarely a “bad seat” on the boat.

A Gatun Lake cruise with a visit to Monkey Island Panama is included in Caravan Tour’s all inclusive Panama Vacations. Exceptionally priced and fully escorted, these all-inclusive Panama vacations are a great value; priced from just $1,295.

Check out our Panama tour reviews page to read what others have to say about this tour.